Have you ever seen those videos depicting mechanized arms repetitively opening and closing a car door in order to test the durability of an automobile’s structural soundness?  Robots and automation have replaced such testing scenarios; for, in the “old days”, you can imagine a “quality assurance specialist” opening and closing, opening and closing the door, the hood, the trunk, etc., to make sure that it doesn’t fall apart — and in the meantime, doing grave damage to the inspector’s own anatomy because of repetitive stress upon doing the same job over and over again. 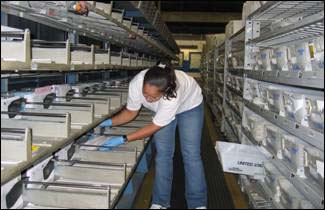 The human body has often been marveled at.  If from a religious viewpoint, it is perfection created in the image of a perfect being.  If from an evolutionary standpoint, it is the result of a lengthy elimination of genetic mishaps through trial-and-error consummated by a process where the survival of the “fittest” wins out.  Yet, every functional anatomy — whether made of human flesh, of mechanical apparatus or a combination of both (what was once referred to as “bionic” limbs) — has its limitations, and whether the human body was meant to undergo repetitive usage necessitated by the requirements of employment is a question to be pondered.

U.S. Postal workers are exposed to a unique hazard — that of repetitive stress injuries.  Such injuries or medical conditions are caused by the human anatomy engaging in repeated movements and motions performed over and over again, whether for employment or in daily living activities.  The effects culminating from such activities are often identified as “repetitive stress injuries”, or sometimes as “cumulative trauma disorders”, “repetitive motion disorders” or “overuse syndromes”.  However one terms it, the resultant consequences encapsulate a wide range of medical conditions and injuries which impact muscles, ligaments, tendons, nerves, and the structural integrity of interconnective tissues which make the miracle of the human body work.

U.S. Postal workers are particularly susceptible to such injuries, precisely because they must engage in such repetitive motions and movements in the daily course of their craft.  The result?  Various medical conditions arise, including (but certainly not exhaustively limited to):

Postal workers who suffer from such injuries are often faced with multiple challenges:  As injuries often mount once a single medical condition begins to develop (the known phenomena of, “When it rains, it pours”), and as age begins to play a factor in one’s career (can one make it to age 56 with 30 years of repetitive stress?), can it be proven that such injuries are occupationally-related?  And what about the phenomena of the “last straw that broke the camel’s back”?  You know — you work as a letter carrier for 25 years and have been feeling sore knees for quite some time, but on a bright and sunny day you decide to challenge your teenage son to a pick-up game on the basketball court and twist your knee.  Question:  Was it really that overenthusiastic jump shot that resulted in a jarring crunch to the knee, or the 25 years of walking 10 – 20 miles on concrete surfaces that ended with a bum knee?  Of course, the Emergency Room Report notes that the “individual comes in today with right knee pain; says he was playing basketball with his son when…”.

Was the human body meant for decades of repetitive activities or motions?  Certainly, there are mitigating ways of working that one should be aware of when first a person takes on a career which will require repetitive work.  But, then, when we were 20 or so, who ever thought that we were less than invincible, indestructible, and of an enduring quantity?  The Mail Processing Clerk, the Mail Handler, the Letter Carrier, the Flat Sorter (Automation), the Electronic Technician — in his or her early days, could do the job, come home and jog 5 miles for leisure and relaxation.  Then, into one’s 30s, perhaps the tinge of soreness and hint of fatigue forced you to cut back to less strenuous activities; and by 40 or so, watching a football game was preferable to actively playing the sport, with a compromise that “gardening” was just as healthy and walking to the grocery store was good exercise as well.  Days and weeks go by; and months turn into years.  Throughout, without being fully conscious of the consequences, you have been engaging in uninterrupted repetitions of movements and activities at work which involves extensive overexertion often at the expense of proper posture or adequate rest.  Singular or multiple symptoms begin to appear:  Pain; aching that will not go away; tenderness at various sites; stiffness that cannot be stretched-away; throbbing; tingling; persistent pain; numbness; loss of sleep because of the high distractibility of pain; fatigue that borders on profound fatigue.

You are suffering from Repetitive Stress Injury.

Whether the impact is upon your shoulder, neck, back, fingers, wrists elbows, ankles, feet or some other part of your anatomy, the miracle of the durable body has begun to reveal its structural vulnerabilities.  When that realization comes to light, the distance between what you have accomplished and the goal of retirement becomes a seemingly insurmountable gap.  Filing for Federal Disability Retirement under FERS may be the best option for the Postal worker who can no longer endure the repetition required of a craft employee — or even of Managers, Supervisors and Postmasters.  It is a benefit which must be fought for and proven — that you are no longer able to perform one or more of the essential elements of your positional requirements.  The human body was ultimately never intended for endless repetitive stress, and for the Postal worker who suffers an injury or medical condition resulting from a workplace injury — or even from an off-site injury from a pick-up basketball game ( remember that eligibility for disability retirement, unlike Worker’s Compensation, does not depend upon the medical condition being work-related), consider the benefit of filing for Federal Disability Retirement with the U.S. Office of Personnel Management.